Mould can grow in our cars for many different reasons.

If the car is in use, then normally food spillages & drink spillages left untreated are the main culprits for mould growth.

Mould is caused by excessive moisture in your vehicle & it produces allergens.

According to the nhs “Inhaling or touching mould spores may cause an allergic reaction, such as sneezing, a runny nose, red eyes and skin rash” 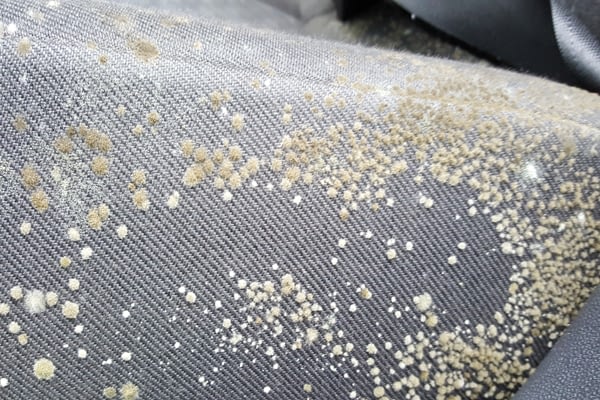 If you have, Mouldy Seats, Seat Belts, Headlining, Dashboard or Mouldy Upholstery  then the chances are you need our service.

Once moisture enters the vehicle and a combination of the car not being used at all, Mould can easily grow. Water ingress from a damaged seal or a leak is a main culprit and it really can cause your vehicle to smell and look very unsightly.

Once the Mould Removal process has been completed & the whole car has been hoovered, scrubbed & shampooed, we apply a chemical on all fabric upholstery & carpets to make your vehicle smell fantastic again.

Mould under normal circumstances will not damage your car if caught before it gets too bad.

The dashboard can be repaired by re-colouring it to match the current colour of the dash. It is very important to keep your eye out for any mould build up.

We use cookies to ensure that we give you the best experience on our website. If you continue to use this site we will assume that you are happy with it.Ok